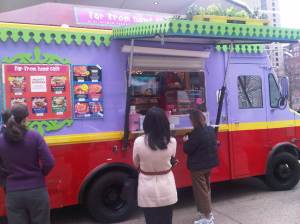 After “slumming” it in the U.S. Virgin Islands for about 25 years, Larry Comroe and Wade Smith have returned to Philadelphia and launched their food truck, Far From Home Cafe, starting yesterday, February 17, 2011, at LOVE Park.  Food truck-lovers from Center City, deprived of many good food truck options, have have swarmed to the truck, causing it to sell out of food on its opening day.

I ordered the Texas Chili Dog.  It comes split open (allowing the inside to cook as well as the outside), with the aforementioned toppings.  The buttered roll, which held together pretty well, was a nice touch.  Eating it can get a little messy, though they did provide a fork if you choose to eat it that way.  And it was pretty filling.

The major drawbacks of Far From Home are the price point and the time to prepare the food.  Spending $5.75 for a cheeseburger, $4.75 for a chili dog or even $8.75 for a double cheeseburger from a food truck is a little high.  The quality, at least of the chili dog, however, was pretty good.  Especially in Center City, with good food trucks in scarce quantity, there’ll be people lining up, and with only one person working the grill, there will be often be waits.  Today, because a big order of about four or five burgers was ordered by someone, people were backed up and had to wait about 15 minutes after they put in their order.  Still, Larry and Wade seem like good people and made sure to explain that there would be a little bit of a wait ito ordering customers.

Insider’s Tip: follow the truck on Twitter for the daily “secret” word and get a soda or water for 25 cents with your order.  Also, save room for the deep-friend empanadas or cupcakes.