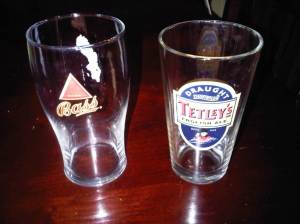 You’d think there was a simple answer to a simple question: How many ounces are in a pint glass?  Not only is there not one answer, but there are at least THREE legitimate answers, as well as perhaps at least another realistic one.

Typically, bars in Philadelphia that serve beers on draught do so in U.S. “pint” glasses.  These glasses are mostly cone-shaped (“conical,” if you will), and chances are, a beer drinker has at least one or two of these at home.  They are widely attributed to hold 16 fluid ounces.

Some other bars, particularly Irish bars (such as Fado) and English pubs (such as the relatively-new Dandelion) pride themselves on their larger Imperial pints, which are marketed as 20 ounces.  Oftentimes, they bulge out near the top (either “tulip” or “nonic” in shape) and are noticeably wider or larger than the U.S. pint.  There is a catch to the size.  While the U.S. pint glass is measured in what we know of as U.S. fluid ounces, the Imperial pint is measured in imperial ounces.  Using the American system, they hold a slightly lesser amount, at 19.2 U.S. fluid ounces. 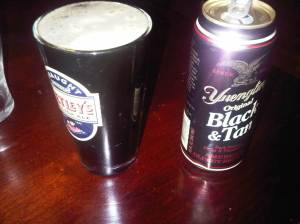 So, that’s three legitimate answers: 16, 20 and 19.2.  But are they actually realistic?  Using a 16 U.S. fluid ounce can of Yuengling Black & Tan, I filled up the U.S. pint to see how much it would hold.  The glass held all 16 ounces, but the liquid was all the way to the top with no head.  I can’t even remember the last time a bar served me a beer that went all the way to the top with no head.  More commonly, you have a little leeway up top to prevent spillage and allow for the foam.  As a result, the realistic answer then is that you usually get about 14-15 ounces in a U.S. pint glass.