In the past few years, the 13th Street area between Chestnut and Locust Street has undergone a significant metamorphosis.  From shady adult establishments and failed stores, it has been completely revitalized with new restaurants, new stores, new storefronts and even a new name (Midtown Village).

Perhaps no one has been more responsible for the transformation of 13th Street than Marcie Turney and Valerie Safran, two entrepeneurs who have made 13th Street their own mini-empire.  Six storefronts (Grocery, Bindi, Open House, Lolita, Verde/Marcie Blaine Chocolates and Barbuzzo), which include three full service restaurants (Bindi, Lolita and Barbuzzo), located within one block between Chestnut Street and Sansom Street, are all part of their operation.  Their affection for the neighborhood is even reflected in the name of their website, We Love 13th Street, and accompanying blog.

The newest establishment, Barbuzzo, has garnered significant praise since its opening last fall.  Just recently, Frommer’s named Barbuzzo as one of the top 10 new urban restaurants.  The Mediterranean kitchen and bar has consistently drawn packed crowds.  On a recent 80 degree Tuesday evening, the Barbuzzo sidewalk seats were packed.

Naturally, one of its specialties is pizza.  There are severa 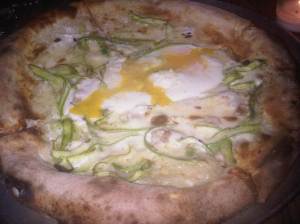 l wood-fired pizzas on the menu, with some rotating specials as well.  The pizzas are cooked at about 800 degrees.  I chose the Asparago, which contains shaved asparagus, barbuzzo pancetta, secret white sauce, house stretched fior di latte, truffle and farm egg.   Not much can be said about the pizza other than to praise it for its flavors.  The egg is also a little runny, and you pretty much have to eat it with your knife and fork.  It is, however, fantastic.

Other than the pizzas, Barbuzzo’s other offerings are also terrific.  Among the highlights are the fideua, which is essentially a noodle paella (featuring delicious calamari and sausage), meatballs (very well seasoned), and the budino dessert.  If you haven’t had yourself a caramel crusted budino yet, you are missing out on perhaps the best dessert in the city.

The menu is pretty substantial for the type of restaurant Barbuzzo is.  Even with the small plates format, you can easily order completely different items on multiple visits.  Its pizzas also easily fall within the upper crust of the Philadelphia pizza heirarchy.

Error: Twitter did not respond. Please wait a few minutes and refresh this page.