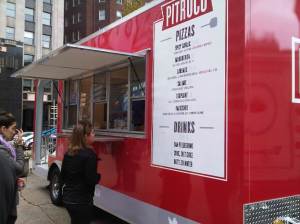 The Philadelphia food truck/cart scene has definitely taken leaps and bounds forward.  While it still has a ways to go to come close to the variety and quality of the New York, Los Angeles and Portland, Oregon vendors, there’s been much progress.  Just a few short years ago, we were, more or less, limited to long-standing, stationary trucks parked in University City and Temple and relatively average carts in Center City.  There were no Twittering trucks announcing their location and presence to their followers.  Food trucks were notably absent from Center City.

Thankfully, things have gone up and up.  New food trucks and carts have popped up, including roving ones.  The variety and quality have vastly improved, with cupcake trucks, a taco truck from an Iron Chef, as well as other ethnic specialty foods.  Events such as the Night Market and Vendy Awards have also helped spotlight the scene.

And now, the next step in the evolution is the pizza food truck in Center City.  And not just any pizza, but wood-fired, Neapolitan-style pizza.  Pitruco Pizza recently made its debut, with a current rotation of two days at Love Park in Center City and two days in University City. The bright red roving operation is actually a trailer that includes the wood-fired stove in the rear.  Inside the truck is a well-oiled operation of five employees.  One person takes the order, the next prepares the dough, the third places the sauce and toppings, the fourth bakes and rotates the pizza while the fifth supervises and assists with serving the pizzas.  As I doubt the truck’s oven reaches 800+ degree temperatures, the pizza stays in the oven a tad longer than many brick and mortar wood-burning places, but you still get your food relatively quickly.

Currently, there are six pizza choices, including Spicy Garlic, Margherita, Sausage, Eggplant and Radichio.  In one of the better bargains around, all the pizzas, which are roughly the size (though slightly smaller) of the standard Neapolitan pizza, are between $6.50 to $9.

And the pizza itself?  Very good.  I had the Spicy Garlic, which contai 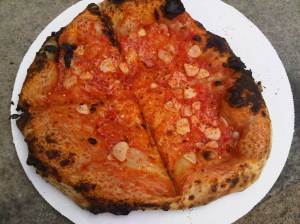 ns red sauce, garlic and hot pepper, with the free addition of pecorino on it.  The pizza comes out with classic wood-fired marks and some bubbling on top.  The crust is light and airy.  It’s very soft and chewy but yet has substance so that the pizza doesn’t fold over.  Observing the upskirt also reveals an attractive char.  There was definitely a spicy quality to the pizza, and the garlic and hot pepper shine through.  I was quite satisfied with the meal.  It’s difficult to believe that a pizza of that quality can come out of a truck and for that affordable a price.

Pitruco is scheduled for Love Park on Mondays and Wednesdays.  Last week, rain washed out the Wednesday appearance, but it tweeted on Friday that it was planning on popping up at Love Park for lunch.  Sure enough, there was a decent crowd there waiting to try the new truck.  Given its performance so far, let’s hope Pitruco shows up regularly regardless of the weather.