Native New Yorker Jennifer had enough.  Another serving of mediocre pizza from West Philly was driving her crazy, and she broadcast, via Facebook, her pronouncement: Philly pizza was crap (except she used a more colorful adjective).

I, for one, will not tolerate anyone disparaging Philadelphia’s pizza scene. Immediately, I touted the city’s great pizza tradition and diverse pizzerias.  Other folks piped in that they wanted to try a lot of these places in town, particularly in a group outing.  One thing led to another, and the Philadelphia Pizza Crawl of December 2012 was organized. 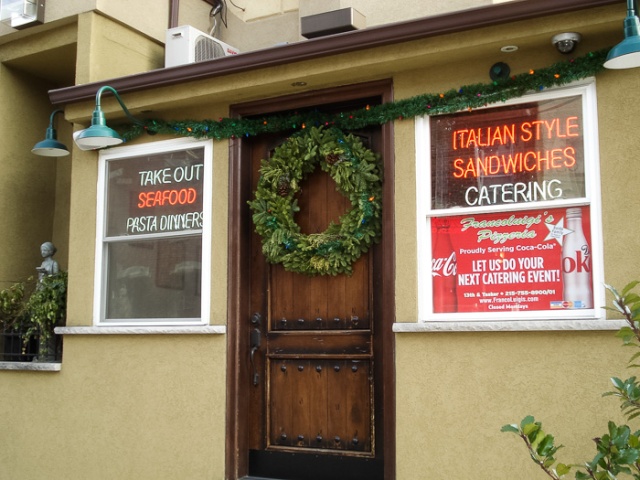 First Stop – FrancoLuigi’s Pizzeria,13th and Tasker, 11:45 a.m.  Its website says it’s South Philly’s Best Pizza, so it must be good.  FrancoLuigi’s is a very “old school,” classic, South Philly spot connected to High Note Cafe.  When you enter, you immediately notice a beautiful display of an array of their pies.  With a16 people at the start, we ordered two large pies, one plain and one pepperoni.  As we were on the initial stop, enthusiasm was high, and the pizza was quickly devoured.  There was some nice color on the bottoms of the pies, even with the use of pizza screen.  It was a good, solid start to the day.

Second Stop – Santucci’s Original Square Pizza,10th and Christian, 12:55 p.m., distance walked: 0.9 miles.  Santucci’s is Philly’s original square pizza, so this stop offered a completely different style of pie.  The crowd was good with walking, and we pre-ordered, allowing the pizza (large plain and pepperoni 17” x 12” square pies) to be served a few minutes after we arrived.   Many folks had not been to Santucci’s, and they liked the sweet sauce and buttery crust. 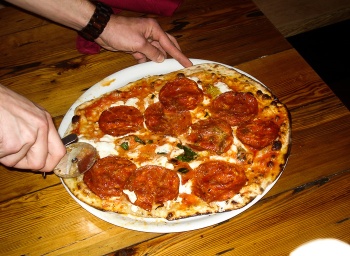 Fourth Stop – Rustica Pizza, 2nd and Poplar, 3:20 p.m., distance walked: 2.1 miles.  A Best of Philly award winner, Rustica Pizza is a neighborhood pizza slice spot with gourmet toppings.  Its motto: unusual pizza and sandwiches.  More folks joined here, so we ordered three large pies: a plain, a pepperoni and a McTigue.  The latter pie was a whole wheat pizza with figs, pine nuts, gorgonzola, fresh basil and balsamic glaze fig.  This pie was a winner.   People loved the figs though many also observed they couldn’t eat more than a slice or two of it.  The other pies went down far easier.  So far, the participants (save for one pregnant woman) were cool with walking to each spot. 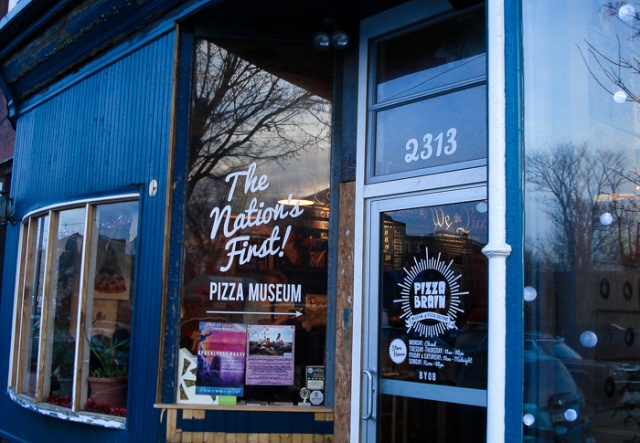 Fifth Stop – Pizza Brain, Frankford and Dauphin, 4:25 p.m., distance walked: 1.6 miles.  Pizza Brain is the world’s first pizza museum, so it was essential for the trip.  By now, the waking between spots was adding a lot of time and making us later.  Here, for about 26 people, we pre-ordered a Jane (mozzarella, provolone, grana padano, fresh basil), a Forbes Waggensense (mozzarella, fontina, grana padano, basil, pepperoni) and a Charlie Mayfer (mozzarella, sweet potato, honey crisp apple), but we were 20 minutes later than we thought we would be.  It didn’t really matter, as the pizza, especially the crust, though a little cold, was still really good.  The Forbes Waggensense was a favorite, particularly with the spicy taste.  There was definite pizza fatigue setting in at this point.  I think we also dutifully impressed Pizza Brain founder Brian with our numbers and day’s mission. 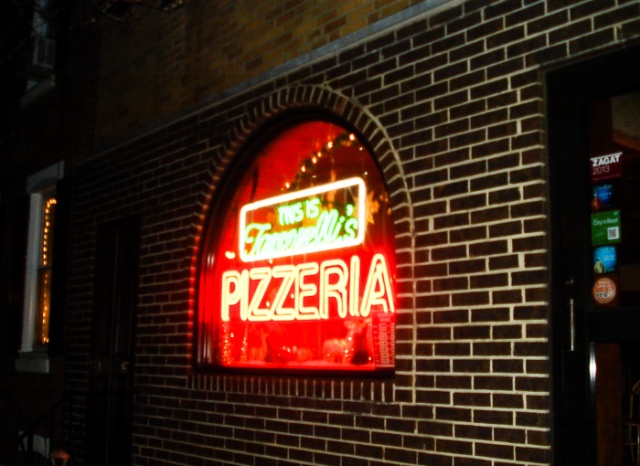 Final Stop – Tacconelli’s Pizzeria, East Somerset and Almond, 5:15 p.m., distance walked: 1.2 miles.  Making pizza in the same oven since 1946, Tacconelli’s is possibly the premier pizza spot in town and routinely garners national recognition.  Here, we reserved the private room and four large pies for the group of about 27.  We got the signature white pie with spinach and tomato, a Margherita, a red pie with pepperoni, and a white pie with basil and tomato.  For those not full and fatigued, the crowd loved the tomato taste.  Some really liked the basil and tomato, while others preferred the Margherita.

Summary – About 30 participants, 18 large pies, 6.3 miles walked.  It was tough to select an overall “winner” though people really liked several individual pies: the Charlie Mayfer at Pizza Brain, the McTigue at Rustica, the Santucci’s square pies, the Nomad Shiitake mushroom pie.  So basically, all the spots.  But the mission was successful, as Jen was convinced that there is good pizza to be had in Philly.