It wasn’t easy, and it took an extension of time along with some additional promotional rewards, but Saint Benjamin Brewing reached and surpassed its Lucky Ant fundraising campaign.  Brewer Tim Patton extended the fundraising period to May 8 and also offered up open bar tickets to the grand opening party for the brewery when it opens this fall.  With the goal of $20,000, Saint Benjamin raised $21,275 (if it did not meet the goal, everyone would have gotten their money back with no promotional rewards), which will allow it to restore the exterior of the historic building and facade.  More importantly, it will allow Saint Benjamin to move  closer to finally opening and serve the many folks who have supported the brewery and are eager to collect on their promotional rewards. 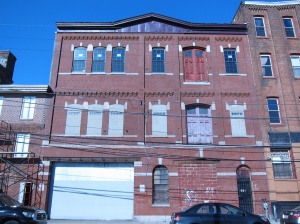 There are over 2,400 breweries operating in the U.S.  That number will be even higher by the end of the year, as the number of small and independent brewers increases.  Enthusiasm for good craft beer is still growing, with craft beers now accounting for 10 percent of sales of all beers.

So you brew beer at home and now you want to join these ranks and open up your own brewery in Philadelphia?  Piece of cake, right?  Not quite.

Fishtown resident Tim Patton is starting his own nanobrewery called Saint Benjamin Brewing Company.  Though the brewery was incorporated back in 2010, Tim still is in the process of taking all the necessary steps before he can open up later this year.  The long “delay” is all thanks to state and city requirements and restrictions.  Given all the barriers, it’s not surprising few small breweries have opened up within city limits.