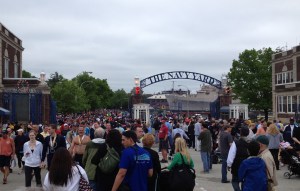 At the starting line of the Broad Street Run this past weekend, you could see a colorful array of clothing.  With the race having over 34,000 participants, it was no surprise to see so much variety in the attire being worn.

What was particularly interesting, however, was how people dressed for the weather.  With the temperature at about 58 degrees at the start and climbing no higher than 60 by 10 a.m. (when many runners would be finishing), many treated the race as if they were running on a summer day, with t-shirts or tank tops and shorts.  Others took a more “pessimistic” view of the cloudy conditions and accounted for the lack of sun with long sleeves, pants or crops.

Then, there was the humidity factor.  Some said that the humidity (which averaged 78 for the day) was relatively low.  Others, like top American finisher Michael McKeeman, believed the high humidity hindered performance.

So, were the Broad Street Run weather conditions good?  If not, what constitutes ideal running conditions?

From past experience, I can say what are definitely NOT good running conditions:

The 2010 Broad Street Run was particularly notable for its near record temperatures that reached a high of 89 that day with extreme humidity.  I’ve never seen that many people needing medical attention or otherwise stretching out cramps in the middle of the race.

At the other end of the spectrum, cold temperatures can make it quite uncomfortable to run.  The extra layers you have to wear and general discomfort to your hands and face slow you down.  Sure, there are benefits to cold weather running, such as less heat stress and sweat, but who wants to run outside when it’s 20 degrees and windy?  There’s a reason why there aren’t too many marathons in the Northeast or Midwest that take place n the middle of February.

Perfect running conditions, then, are somewhere in between.  Running guru Jeff Galloway believes that people run slower when the temperature rises above 55 degrees, though performance does not suffer so long as you’ve probably trained for adapting to the heat.  The actual danger zone is when the temperature rises above 65 degrees, which is when the body can’t get rid of heat fast enough.

Personally, I felt that Sunday’s conditions were as good as it gets.  Running a long distance race isn’t like a space shuttle launch.  We can’t wait for perfect weather, so good weather is close enough.  It was high 50s, cloudy and a nice (but not too windy) breeze picked up once in a while.  Yes, there was a little humidity, but it was not overbearing.  Indeed, Broad Street Run race director Jim Marino agreed in describing Sunday’s weather as “absolutely perfect running conditions.”  Other than slightly lower humidity, what else could  you have possibly preferred?

2 comments on “Race Running Weather: What Are Perfect Conditions?”