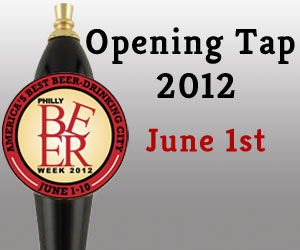 For area beer enthusiasts, it’s the most wonderful time of the year.  Next week marks the beginning of Philly Beer Week, the annual beer festival of America’s Best Beer Drinking City.

What started out as a festival with modest goals has grown into the largest beer festival of its kind in the country in terms of number of events.  Check out my prior article about its origins here.  This year, there are over 200 venues having well over 1000 events over two weeks.

One of the more remarkable features about Beer Week is the quality of the breweries involved.  The list of breweries having events or having beers featured reads like a who’s who of the nation’s best breweries: Founders, Russian River, Sierra Nevada, Stillwater, Bell’s, Stone and many others.  Most of the area’s local breweries will also be involved.

It’s impossible to hit up every single Philly Beer Week event.  The key is to try to pick and choose several events over the time period.  Given the number and variety of events, it’s tough to go wrong.