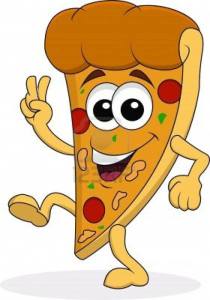 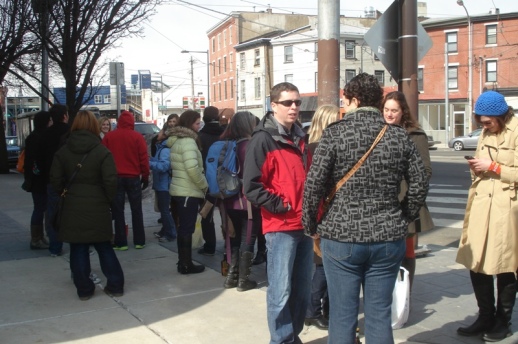 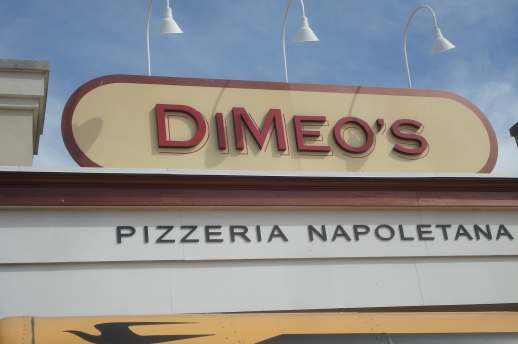 First Stop – Pizzeria DiMeo’s, Andorra Shopping Center on Henry Avenue, 12:20 p.m.  So we had 28 people at the pickup location in Fishtown ready to go at 11:30 a.m.  Unfortunately, the bus was twenty minutes late.  Oh well, at least it wasn’t too cold.  Because of its location, Dimeo’s, which opened in April 2012, is not as well known as other spots in the city, but don’t sleep on this Neapolitan pizzeria, with a cozy indoor space and a wood-fired oven firing up 900 degrees. 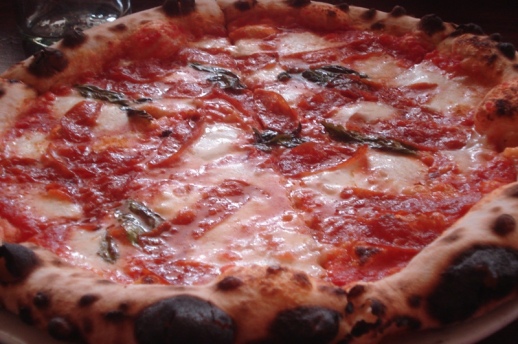 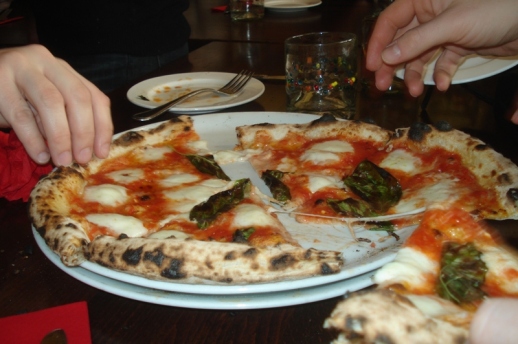 We ordered a couple of Margheritas, two pies with pepperoni and one with Pomodorino tomatoes.  Note to self: pizza restaurants seating a group of close to thirty are somewhat baffled when you only order five Neapolitan-sized pies for the group.  On the other hand, we were not taking away business the place would otherwise have had at that time.  As far as the pies, they looked and tasted great.  There was nice blistering up top and good charring on the bottom.  The crust was thin and chewy, but it did not fold over when you picked up a slice.  Participants also liked the sauce and described the crust as having a buttery taste.  The Margherita was classic, and the pepperoni was solid.  With the good start to the crawl, we summoned the bus and traveled to the second stop. 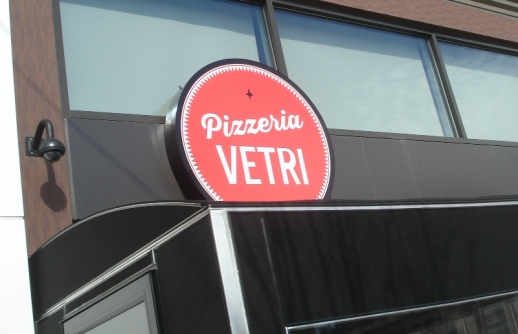 Second Stop – Pizzeria Vetri, 20th and Callowhill, 1:20 p.m.  Of all the spots, Pizzeria Vetri was the one that participants most looked forward to trying.  This newcomer opened last September and has been non-stop busy ever since.  Of course, because of Pizzeria Vetri’s popularity, seating a group of 29 wasn’t going to happen.  Instead, we planned ahead and called our order in for pickup to eat on the bus. 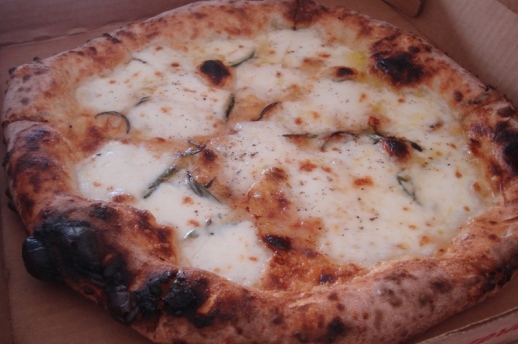 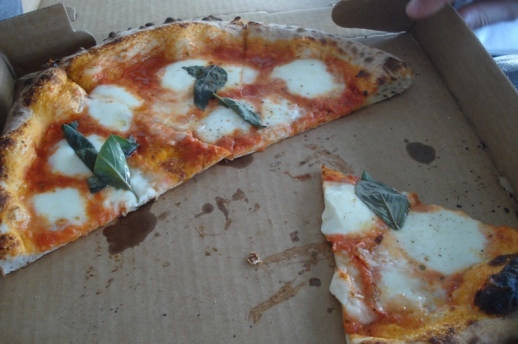 We went with two Margheritas, two Marinara pies and one Renato, which had mozzarella, rosemary, olive oil and sea salt.  Even with the lack of ambience of eating on the bus, people were blown away by the quality.  I had the Margherita and Marinara, and both had amazing flavor, particularly with the crust, which had a salty taste.  The pies also were well-spiced.  People really liked the Renato as well.  In a direct head-to-head Neapolitan pie comparison between Vetri and DiMeo’s, the latter was good, but Vetri was just on another level.  Because we didn’t have to wait for the food, we were done real early and headed early, way ahead of schedule, to stop number three. 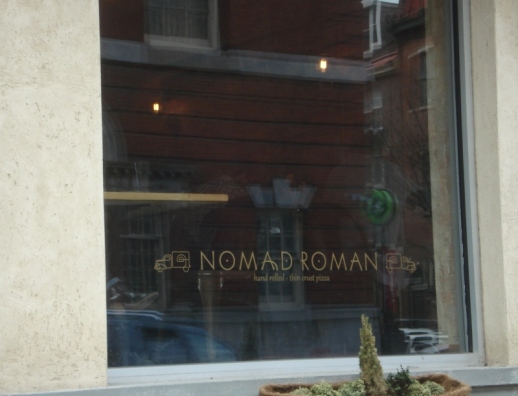 Third Stop – Nomad Roman, 13th and Locust, 2:00 p.m.  During the last pizza crawl, the original location of Nomad Pizza was perhaps the crowd favorite.  Last fall, Nomad added a location at 13th and Locust specializing in Roman-style pies.  These pies are a little larger, a little thinner and a lot crispier than Neapolitan-style.  With the extra time we saved by eating on the bus, we were almost too far ahead of schedule, leading to a short wait before our group could sit down. 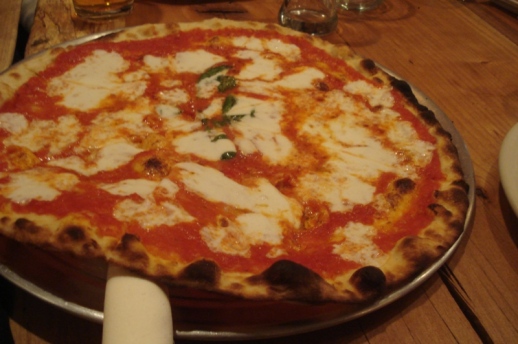 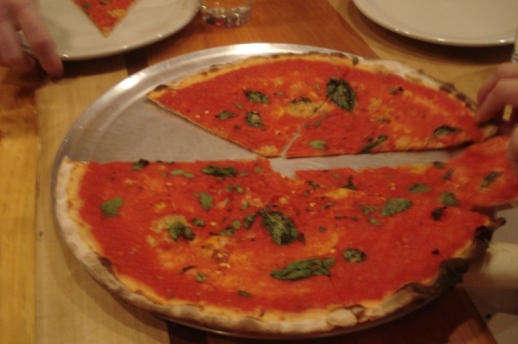 We ordered up regular Margherita, Margherita di Bufala (with authentic Bufala mozzarella) and Marinara.  With the bigger pies, we could cut the slices even smaller to allow people to taste more than one slice.  The crust style obviously contrasted with what we had just eaten.  Nomad Roman also tends to make pizza a bit spicier than its original Philly location, and the Marinara was no exception.  It was good pizza, though some didn’t think the dough was not as cooked as hot and the bottom was not as charred as it could be.  To those dissenters, I say I will gladly eat your share of Nomad Roman pizza next time! 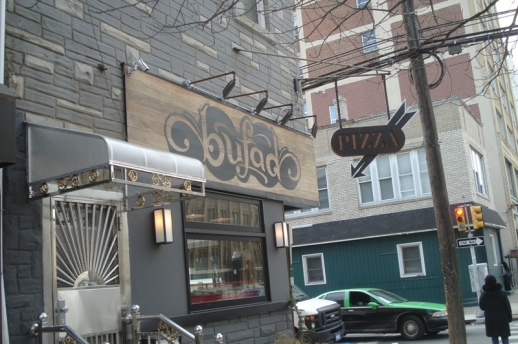 Fourth Stop – Bufad Pizza, 13th and Spring Garden, 3:05 p.m.  At this point, we have vastly overestimated how long we would be at the first few stops, so we’re close to an hour ahead of schedule.  Normally, that would not be a bad thing, but the schedule was planned with the daily opening of the last stop, Pizzeria Beddia, at 5:30.  Getting done too early would leave us having to kill a lot of time.  So we almost have to slow down a bit.  Bufad opened up about a year ago.  It serves up wood-fired Neapolitan pies as well as individual Roman al taglio square slices cut with scissors from a rectangular sheet.  We called ahead, put in our order, and the great folks at Bufad had the pies all ready at our arrival.  Score. 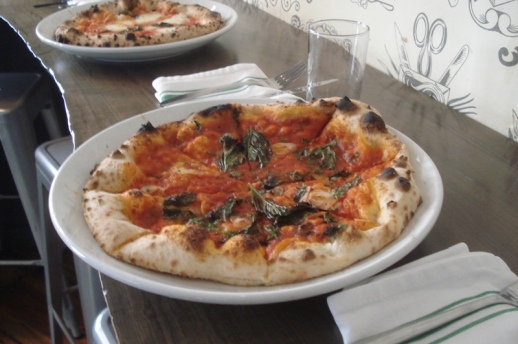 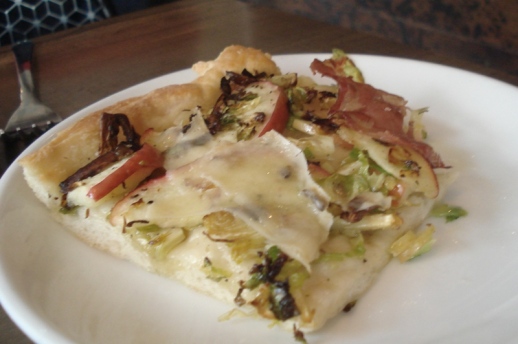 We ordered up Margherita, Marinara and Sausage with Broccoli Rabe.  These great looking pies were cut nicely into eights, instead of the traditional sixes for Neapolitan pizza.  The crust was wonderfully chewy, and the Marinara was nice and spicy.  As an extra, some people tried the al taglio slices, including one with Brussels sprouts, apple and coppa.  This slice was a phenomenal combination of tastes.  It was about 3:30 when we finished, so we headed next door to Prohibition Taproom for a beer before the fifth stop. 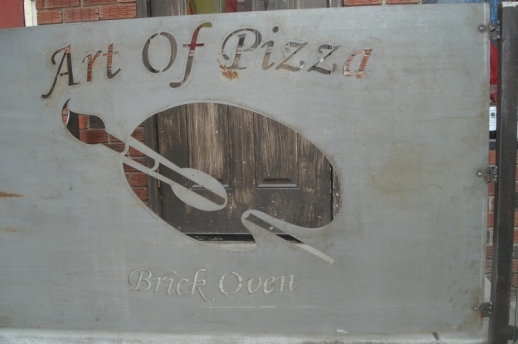 Fifth Stop – Art of Pizza, East Girard and Earl, 4:15 p.m.  And we’re back in Fishtown, where the bus originally picked us up.  The plan was to fist hit up Art of Pizza before putting our order in at Pizzeria Beddia, where you can’t call in and must place your orders in person.  So we ventured to Art of Pizza, where we took over every seat and still had people standing.  This brick oven spot opened up last year.  It serves up closer to what people consider traditional American pizza, but the topping combinations are quite innovative. 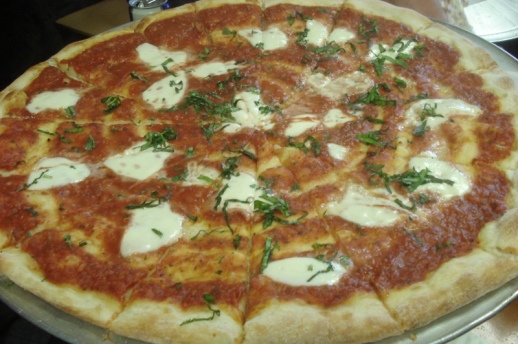 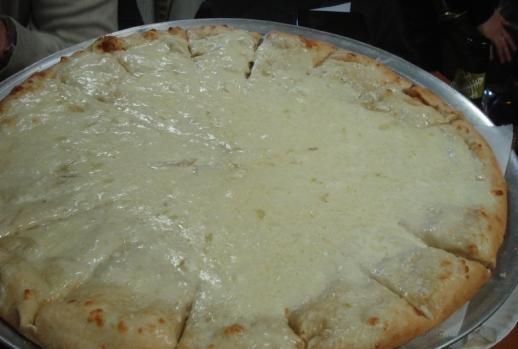 After fielding a request for more adventurous pizzas, we ordered six pies: the Morandi (mozzarella with red sauce), the Da Vinci  (the Morandi with pork belly, red onion and roasted garlic), the Margarita (mozzarella, basil, red sauce), the Botticelli (the Morandi with aged provolone, grated parmesan and roasted garlic), the Giotto (white pie with Alfredo cream sauce, mozzarella, grated parmesan and truffle oil) and the Picasso (the Morandi with grated parmesan, pepperoni and basil).  At this point, fatigue began setting in, and our stomachs, filled with beer and pizza, started to hit their limits.  Art of Pizza had some big slices, so even though pies were cut into sixteenths, they were still sizable.  We trudged on and did what we could.  The Giotto, with its white base and Alfredo cream sauce, was the big surprise hit.  The other pies all were delicious as well but the last pie had a couple of slices we had to find volunteers to finish. 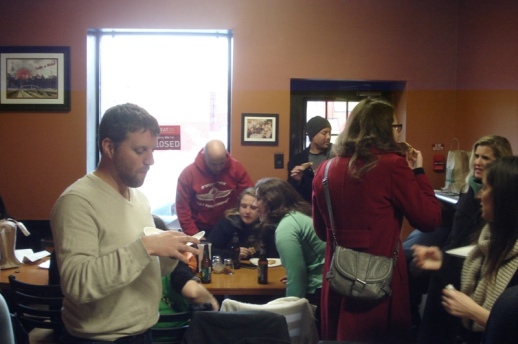 Final Stop – Pizzeria Beddia, East Girard and Shackamaxon, DNF.  Beddia is a single pizzaiolo operation that has its special quirks.  There’s no phone to call in orders, and there are no reservations.  You have to walk in after it opens at 5:30 p.m. to place your order.  It’s either loved or hated by Yelp reviewers; there are very few in between.  On my first go-around, I had a negative experience there, largely based on the hour-long wait at 8 p.m., so I was looking for a second shot.  I get to Beddia to place the order.  Upon checking with the group, however, a vote was taken to skip the last pizza stop.  The group had enough pizza for the day, and any further pies would have diluted from the experience.  Instead, the vote was to go for drinks nearby at interstate Drafthouse, with the remaining funds buying drinks for everybody.  My second impression of Beddia would have to wait.

Summary – About 33 total participants, 28 full pies, 4 al taglio slices, through five hours.  There were also plenty of beers consumed.  The big favorites included the Renato at Pizzeria Vetri, the Brussels sprouts, apple and coppa al taglio stlice at Bufad and the Giotto at Art of Pizza.  Everyone enjoyed, and we did not try to force a final spot when we were already at our limit.  With the influx of all these great new places, in conjunction with all the spots from the first crawl, the pizza future in Philly looks bright.

One comment on “Philadelphia Pizza Crawl of March 2014: The Search for Newer Pizza”