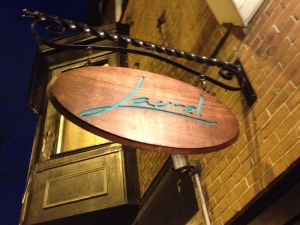 So what exactly is a dinner like at Laurel the hottest and toughest table in town.  Is it really worth the ten week (as of April 24, a midweek July 9th, 9:00 p.m. reservation was the earliest I could locate) waiting period?  To find out, I fortunately made a reservation when the waiting period was only seven weeks (for a midweek 8:15 p.m. dinner) and had dinner this past Tuesday night.  It was quite the experience.

Much has been said about how recently-crowned Top Chef Nicholas Elmi has foregone a more lucrative and traditional restaurant in favor of a small BYO open for only dinner six nights a week.  Indeed, Laurel is quaint and barely seats twenty.  There’s not much for decor other than repurposed jars containing small lights that are hanging on the walls.  It’s as intimate as can be.

Weekend seatings are limited to the $75 seven course prix fixe menu, while those who dine midweek order off the à la carte menu and are encouraged to order all four designed courses.  If you beg enough, Laurel will craft a special prix fixe menu midweek, with smaller portions to enable you to try seven selections.

Each course has its own characteristics.  The first course, currently including torn scallop, foie gras terrine, salad and Albacore tuna, is served chilled.  Next is a richer course, such as gnocchi, mackerel and shrimp.  The third dish is the main course of pork, beef or two fish selections.  Finally, there’s dessert. 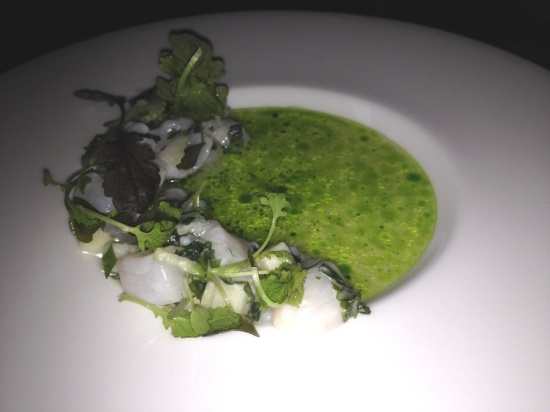 The limited size and seatings allow Chef Elmi to take a significant role in preparing most if not all the plates.  For instance, on my first course, the torn New Jersey scallop with green apple, sea lettuce, and yuzu, Chef Elmi does the hand tearing of the scallop himself.   The scallop, which our waiter mentioned as his favorite dish, is served with the green apple and yuzu (a Japanese citrus fruit) soup poured next to the scallop and lettuce.  It’s best consumed with a spoon.  I don’t remember having scallops that tasted this tender, and the citrus flavor was quite refreshing. 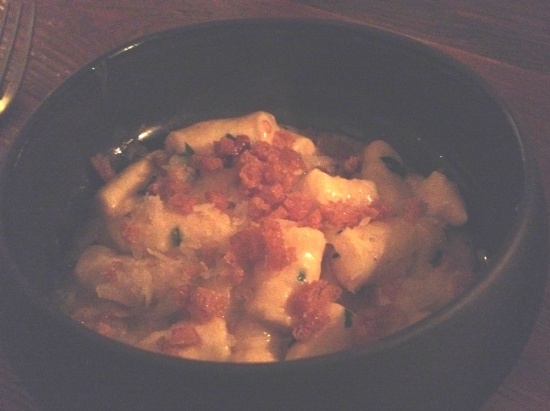 The fresh ricotta gnocchi with pancetta, sourdough and garlic was simply amazing.  With the ricotta, the gnocchi was cheesy with a very light, soft texture.  Meanwhile, the pancetta added some crunch.  This dish was fantastic. 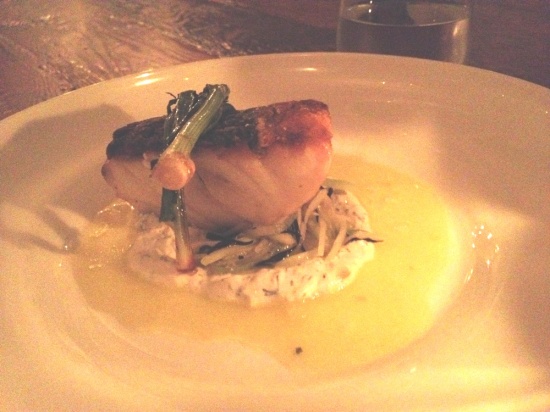 For the main course, I chose the seared wild striped bass with cucumber labne, kohlrabhi and lemon vinaigrette.  The bass with delectable and had a great sear, while the lemon vinaigrette really stood out.  It was a good dish, but probably ranked third behind the gnocchi and scallop. 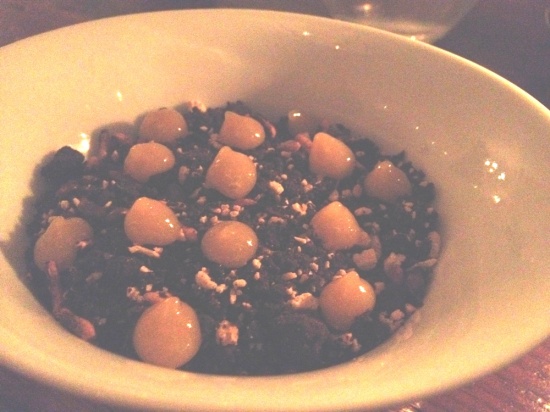 Sure, for the fourth course, you can order the cheese with forest honey, but it would be a mistake to pass up either of the two sweeter desserts.  My selection was the caramelized white chocolate pudding, malt and puffed grains, which was brought out by Chef Elmi himself.  It was also terrific.  The soft and delicate chocolate flavor of the pudding along with the crunch grains made for memorable complementing flavors.

Four courses will run around $66 to $70 before tax and tip, so it’s almost the same price as the prix fixe but not too prohibitively expensive.  Overall, dinner at Laurel was really good, with some outstanding dishes.  With that said, it is probably not as unique as Zahav or as incredible as Vetri.  Is the three month reservation wait worth it on the food alone?  Maybe not.  But when you factor in the ambiance, intimate feel, and personal touch of Chef Elmi, Laurel is one of the best restaurant experiences in town.